The end of the Motorist Aid Call Box in Florida?

The trusty, yet reliable motorist aid call box.  You see them on Interstate 275 as well as Interstate 75 and Florida's Turnpike.
These motorist aid devices that dot the Florida interstate landscape have been around for years.  If you broke down on, let's say Interstate 275 between Interstate 75 and Bearss Avenue (Exit 53) in Tampa or Interstate 75 and US 19 (Exit 5) in Bradenton, all you did was pull up to the nearest call box, pull the handle down, press the appropriate button for the service you needed such as police, medical or a tow truck, return to your car and safely wait for assistance. 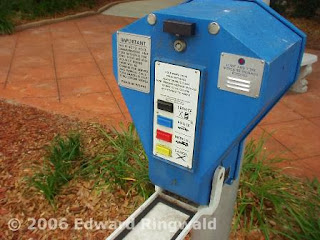 I was surprised to find out that the Florida DOT is in the works of getting rid of the motorist aid call boxes on Florida's interstate highways come January 2014, according to this 10 News (WTSP-TV, the CBS affiliate here in St. Petersburg) article by reporter Kathryn Bursch.  In fact, the photo you see above was used in the article as well as the story that aired on 10 News!  (By the way, I was surprised when I got the phone call from Kathryn asking me for permission to use the above photo for the story she was developing about the Florida DOT getting rid of the call boxes - I thought the call boxes would stay in addition to the other motorist aid services offered to motorists on Florida's interstates - it was a great article by the way).
What I really think the Florida DOT is doing is a big mistake.  Why?
Realize that we live in an era of cell phones, BlackBerries and OnStar.  (Believe me, OnStar is the best communication item to have in your car since the invention of the automobile - if you need help such as a flat tire or you are involved in an accident, just press the OnStar emergency button and a representative is right there).  Things have changed since the emergency call boxes were installed on Florida's interstate highways by the Florida DOT many years ago, not to mention the many variable message signage, cameras and roving patrols by Florida DOT Road Rangers in several Florida areas.
However, there is a drawback to not having call boxes on Florida's interstate highways:
1.  You got a cell phone or OnStar?  Great!  Now what if you are in an area where there is no cellular coverage?  Your phone won't work and you want to be sure that you have access to help if needed.
2.  You are driving a car that does not have OnStar, and your cell phone battery went out on you.  If you are on a long, yet exit-less stretch of interstate highway such as the section of Interstate 75 in South Florida from Exit 101 to Exit 49 also known as the Alligator Alley, you better count on the nearest call box to come to your aid in case of an emergency.
There is an exit between Exits 101 and 49 on Interstate 75, and that's Exit 82, FL 29.  Unfortunately, there are no motorist services located at FL 29 - now there is a meaning to the black lettering on yellow background signs on southbound Interstate 75 before Exit 101 in Naples that tell you to check your fuel gauge, no services for the next 50 miles.
In short, motorist aid call boxes are like an insurance policy for your trip.  Unfortunately, the Florida DOT wants to take away this motorist safety aid in the name of saving money down the road.  However, there is no monetary savings realized if motorists can't have an opportunity to access any aid at the first opportunity.
However, there is one place where the motorist aid call boxes will remain:  The Sunshine Skyway Bridge, as these call boxes are actual phones that serve a dual purpose, not only for motorist aid but for crisis intervention as these phones connect directly to The Crisis Center of Tampa Bay and are staffed 24/7/365 by trained counselors.
On a side note, thinking about pulling over onto the shoulder of the Sunshine Skyway's main span to get that great picturesque view of St. Petersburg or the Gulf of Mexico?  Don't!  Cameras monitored by the Florida Highway Patrol monitor both northbound and southbound traffic and any stopping on the shoulder will result in a Florida Highway Patrol trooper being sent out to investigate.  Instead, the rest areas on either end of the Sunshine Skyway main span provide great photo opportunities.
I think the Florida DOT is making a mistake by removing the motorist aid call boxes.  The motorist aid call boxes are peace of mind for motorists, especially motorists who do not even have a cell phone to begin with.
﻿
﻿
Posted by Edward Ringwald at 5:59 PM No comments:

Now how can we attract Amtrak as another transportation choice in St. Petersburg?  The dedicated rail corridor on the Howard Frankland Bridge would help.  Amtrak service to St. Petersburg can be viable using both a Howard Frankland crossing and the existing CSX Clearwater Subdivision tracks, upgraded to passenger standards.

With that in mind, here are a few Amtrak related ideas as far as a new Howard Frankland rail corridor is concerned:

1.  Connect the existing CSX A Line tracks from Tampa Union Station over to a widened Interstate 275 median.  The widened median is taking shape as a result of the construction underway on Interstate 275 in Tampa from Westshore Blvd. to downtown Tampa, scheduled to be wrapped up in 2016.

2.  Connect and upgrade the track that runs north of the Neve Wye into the Clearwater Subdivision.  That way, Amtrak can run service into St. Petersburg like a serpentine circle and at the same time get rid of that reverse move into Tampa Union Station.

Presently all Amtrak trains serving Tampa Union Station have to be turned at the Neve Wye, a rail spur and turnaround point located east of Ybor City, and backed into the station.  While Tampa is a station stop on the Silver Star, Tampa's Union Station is what is classified as a stub in facility as opposed to a run through facility as is the case of most railroad stations in the United States.

3.  Increase Amtrak's frequency of Florida service by having the Silver Star's partner, the Silver Meteor, serve Tampa instead of bypassing it as it is now.

4.  Both southbound trains can enter the Neve Wye, follow the track to a crossover track to the CSX Clearwater Subdivision, then proceed on that track to a new station stop in St. Petersburg.  Then proceed on the new Howard Frankland rail corridor to Tampa and Tampa Union Station.  After Tampa, proceed southbound to Lakeland, Winter Haven, Sebring and all intermediate points to Miami.

5.  Both northbound trains can stop in Tampa first.  After Tampa follow the new Howard Frankland rail corridor to St. Petersburg and a new station stop.  Then follow the CSX Clearwater Subdivision and over the new crossover track to the Neve Wye and eastbound on the CSX A Line to Kissimmee, Orlando, Jacksonville and points north to New York City.

6.  What about the resurrection of Amtrak's Sunset Limited as a true cross country transcontinental route?  As you know, the eastern terminus of the Sunset Limited is in New Orleans since 2005 when Hurricane Katrina hit.  Let's extend the Sunset Limited back to Florida and make Miami the terminus.  Here's how it can be done:

East on the CSX line from New Orleans and across Mississippi and Alabama and into Florida at Pensacola.  Continue east to Jacksonville.

At Jacksonville route the Sunset Limited onto the CSX S Line and follow it south via Ocala and Wildwood.  At Dade City use the Vitis Subdivision track (the track that connects Dade City with Lakeland) and turn west onto the CSX A Line towards Tampa.

I just wanted to throw in a discussion of Amtrak service and how some ideas for expanded Amtrak service in Florida can become reality thanks to a new Howard Frankland rail corridor.  Granted, Amtrak has good service into Florida with two trains daily but there's plenty of room for improvement as far as service is concerned.

The Howard Frankland Bridge's future as a road and rail corridor

Now that the Florida DOT is considering the replacement of the original 1960 Howard Frankland span, the opportunity for improvements including turning the Howard Frankland into a multi purpose road and rail corridor is here.  And it can be done.

I spoke at one of the Florida DOT public hearings on the replacement of the Howard Frankland Bridge not too long ago.  With the exception of a couple of people who spoke at the public hearing, most including me are in agreement that rail based mass transit is the Tampa Bay region's answer to a good shot in the Tampa/St. Petersburg economic arm.

Sure we got Interstate 275.  You can widen it all you want, but that alone won't help the Tampa Bay region's mass transit woes.

Sure we have buses.  But buses are subject to the same traffic delays as everyone else, even with so-called "bus rapid transit" when buses exit the dedicated bus lanes to get to their intended destinations.

The framework is here.  That framework is a regional transit authority called the Tampa Bay Area Regional Transit Authority, or TBARTA for short.  What TBARTA could do is a merger of both PSTA and HART to create a seamless transit service throughout the region.

Imagine one day you live in New Tampa and you want to go to a Tampa Bay Rays game at Tropicana Field.  Instead of hopping in your car and driving Interstate 275 to St. Petersburg and paying for parking at Tropicana Field, you can hop on a mixture of light and commuter rail right to the game.

Imagine one day you live in the Gandy area of St. Petersburg and you work in downtown St. Petersburg.  Instead of paying outrageously high parking garage fees downtown, you can hop on the light rail and arrive downtown, refreshed and ready to face the work day.

Now that our economy is rebounding, we here in the Tampa Bay region need to seize the opportunity.  And that opportunity is rail based mass transit.
Posted by Edward Ringwald at 5:25 PM 1 comment: