What destinations to place on the Interstate 375 signage 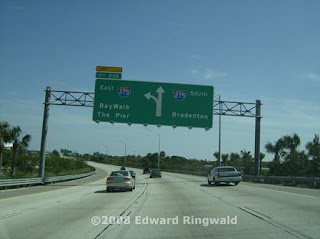 There are two destinations on the signage which no longer exist, according to this St. Petersburg Times article:
1.  BayWalk:  This was an upscale shopping and dining complex together with a movie theater.  Unfortunately, the economic downturn proved to be disastrous for BayWalk which led to so many shops closing and inability to attract new retailers.
St. Petersburg business mogul Bill Edwards (whose money paid for an entry monument on Interstate 275 at the northern entrance to St. Petersburg, just north of 4 St N (Exit 32)) purchased the struggling BayWalk complex and is in the process of reconstructing the complex, which it will become the Shoppes of St. Petersburg.
The movie theater - Muvico's Baywalk 20 - is the only tenant still remaining.
2.  The Pier:  Practically needs no explanation, other than the fact that the people of St. Petersburg voted down the new Pier project, commonly called The Lens.  The Pier closed in May 2013 but its future is uncertain, depending on the will of the people of St. Petersburg.
So, we have destinations for Interstate 375 east that don't exist!  As such, the signage will have to be changed; I have some ideas for new destinations that should be on the signage for Interstate 375:
Vinoy/Straub Park
Waterfront
St. Anthony's Hospital
Vinoy/Straub Park
I threw in St. Anthony's Hospital, as it is a nonprofit hospital.  I am not sure if you can put the name of a nonprofit hospital on an Interstate highway sign, but I believe you can't put the name of a for-profit hospital on an Interstate highway sign (Imagine for a moment signage for Northside Hospital at Exit 26 (54 Av N)!)
Fine Arts Museum
Vinoy/Straub Park
OK.  What are your ideas for updating the destination signage for Interstate 375 on Interstate 275 in downtown St. Petersburg?  Feel free to leave a reply!
﻿
﻿
Posted by Edward Ringwald at 8:40 PM No comments: