Last week (17 February 2008) when the traffic pattern was shifted on Interstate 275 just past Exit 42 (Armenia and Howard Avenues) traffic got so bad that backups clear across the Howard Frankland Bridge into St. Petersburg beginning just after Exit 32 (4 St N/FL 687) are becoming the rule rather than the exception. Were you among one of the many commuters stuck on Interstate 275 and, somehow, you were late for work or that important meeting in Tampa? Or, did you miss your flight from Tampa International Airport?

Some of you tried to get around this by using the Gandy Bridge (US 92) as an alternative. No can do, due to construction and backups on the eastbound span of the Gandy Bridge. (That's right, there is work going on at Gandy Blvd. in Tampa!)

There is indeed a widening project going on at Interstate 275 in Tampa. That’s right, we need it to help alleviate congestion. The first segment from just west of Ashley Drive/Tampa Street/Scott Street (Exit 44) westward to Himes Avenue (Exit 41C) is just the icing of the cake – it’s part of a bigger project to give Interstate 275 in Tampa a major overhaul.

On Monday, 25 February 2008 I came across one of Bay News 9’s “I-Polls” where you can vote and leave a comment. The topic was about how the construction on Interstate 275 in Tampa will bring needed relief. Well, I got some bad news for you: Even with the improvements made there will not be any congestion relief for Interstate 275.

First, here is a comment I left at Bay News 9:

The widening of Interstate 275 in Tampa will bring some relief but not the relief hoped for. It is going to take a twenty lane Interstate 275 at least to solve our traffic woes. But what we desperately need here in the Tampa Bay area is rail based mass transit and it is needed now - not five years, not ten years, not twenty years! No matter why corporations won't come to the Tampa Bay region and fewer people move here all because of lack of a workable mass transit system and increasingly unaffordable housing. 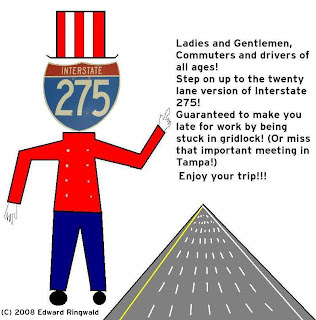 If you want to live close to work (and your place of work is in a downtown area like Tampa or St. Petersburg), forget it. Unaffordable housing in the Tampa Bay area is making people take commutes of an hour or more from outlying areas such as Pasco or Hernando Counties. Not only you are throwing money down the drain in commuting costs (when will we see gasoline top $4.00 a gallon? Count on it!), you are paying high insurance due to your long commute to and from work!

So you can’t find a place close to work that is affordable for you. You explore alternatives like our present day mass transit system provided courtesy of HART and PSTA. Unfortunately, your work schedule conflicts with the bus schedules, so a car is a must.

The result: A highly clogged Interstate 275 and you are stuck in traffic going nowhere.

Now for the real solution to the clogged Interstate 275 mess, even after it’s all said and done: Rail based mass transit. Baltimore has it. Washington, DC has it. Los Angeles has it. Ft. Lauderdale and Miami have it. And Orlando is going to be getting it soon. But the Tampa Bay area lacks a great rail based mass transit system.

Why rail? Buses are great but they are subject to the same traffic gridlock you and I are used to when we drive. Rail based mass transit would provide an excellent alternative to sitting in traffic on Interstate 275 all day. Besides, you can sit back and enjoy the trip to the office rather than be stressed out.

Rail based mass transit is what the Tampa Bay area really needs, rather than a twenty lane Interstate 275. Besides, land for any expansion of Interstate 275 is at a premium and it gets very expensive.

And rail based mass transit can provide a much needed boost to the Tampa Bay area economy. Complement that with a properly widened Interstate 275 and there you go.

By the way, if all goes as planned this segment of Interstate 275 being reconstructed in Tampa is slated to be done in 2010, according to the folks at the Florida DOT. Now I want to hear from you your Interstate 275 in Tampa experiences!

Interstate 275 and the two feeders in St. Petersburg: To set the record straight

Recently I received an email through the Interstate275Florida.com feedback page from someone claiming to be a professional highway engineer. Why I say the word "claiming" is that sometimes there are people out there who say they are when in fact they are not.
Here is the text of the email I received (I edited it to clean up the language):
Hi, I'm a professional highway engineer. I don't know how you can get so excited about a ... joke of an interstate highway, which is what I-275 is, and pathetically it is the only freeway in Pinellas County! (I-175 and I-375 are simply glorified feeder ramps and do not deserve to have their own route number).
I am going to set the record straight as to why Interstate 275 was pushed through southern Pinellas County and the two feeder highways, Interstate 375 and Interstate 175.
First, when the interstate system was being constructed in the Tampa Bay area in the 1960's and 1970's Interstate 275 in St. Petersburg as we know it today was not going to be Interstate 275 in the first place. The highway was initially supposed to be a continuation of Interstate 4 which was planned to end around St. Pete Beach (and it was not intended to be routed over the Sunshine Skyway Bridge to begin with, as it was a two-lane cantilever span back then). The only reminder of what it was yesterday can be found on a mileage sign as you drive northbound on Interstate 275 as you pass the 4 St N (Exit 32) exit: Tampa International Airport 7 miles, Tampa 11 miles and Lakeland 45 miles. Now we know that Lakeland is not on Interstate 275 - it's on Interstate 4.
Second, when the Florida DOT decided to push Interstate 75 through Tampa southward to Miami, Interstate 4 was truncated at what we Tampa Bay area residents know as "malfunction junction", which is Interstate 275's Exit 45B in Tampa. Interstate 75 was simply extended over the Howard Frankland Bridge into St. Petersburg.
Third, a Tampa bypass was in the works as Interstate 75 was being pushed through St. Petersburg and it was initially going to be Interstate 75E. But the organization responsible for the numbering of our nation's interstate highways, the American Association of State Highway Transportation Officials (or AASHTO for short), put an end to the practice of letter-suffixing interstate highway numbers. So, the Florida DOT decided on routing Interstate 75 over the bypass route and renumbering Interstate 75 as it was being constructed through St. Petersburg as Interstate 275.
Fourth, what about our two feeder interstate highways in downtown St. Petersburg, Interstates 375 and 175? I believe these highways are not "glorified feeder ramps" as referred to in the email I received; instead these two short highways are spur routes of Interstate 275 that serve the downtown St. Petersburg area. Remember, as these interstate highways are spur routes (meaning they end with no interstate highway connection at the other end) the first digit in the three digit number will be odd. Back when Interstate 4 was planned the feeder routes were only shown on planning documents as Interstates 304 and 104.

By the way, a ramp is a short one- or two-lane low speed road that connects a street or highway to or from an interstate highway in a safe manner. Interstates 375 and 175 have their own exit and entrance ramps just like Interstate 275: Interstate 375 at Martin Luther King St N, 8 St N (entrance only), 4 Av N and 5 Av N just before 5 St N (eastern terminus) and Interstate 175 at Martin Luther King St S and 6 St S (westbound entrance and eastbound exit only) as well as 5 Av S (eastbound terminus exit only) and 4 St S (westbound entrance). But the mainline of both Interstates 375 and 175 are identical to the mainline of Interstate 275 for the two feeders' entire length.

However, with the conversion of US 19 in Clearwater and northern Pinellas County to an interstate-like highway I would advocate a connection to Interstate 275, starting south on US 19 around Palm Harbor and routing it all the way to just north of Park/Gandy Blvd. (FL 694). Then have the new highway turn east and follow an upgraded version of Gandy Blvd. passing Interstate 275 (which would have a reconfigured interchange) to Tampa, connecting it at the Crosstown Expressway. Besides, an upgraded Gandy would be a beneficial hurricane evacuation route. We could call this highway Interstate 875 and I have an idea for a Gandy makeover and Interstate 875 here at Interstate275Florida.com simply by clicking here.

While we are on the subject of route numbers, posting a route number is not as easy as you think. For a route newly constructed or upgraded to interstate standards to get an interstate route number this is what has to be done. First, an application has to be submitted to AASHTO from the Florida DOT (or any other states' DOT for that matter) that details the justification and need. Second, AASHTO reviews the request and makes a decision: If the request is denied the application is sent back to the requestor; however, if the application is approved there is one more step. Third, an application approved by AASHTO to establish and/or change an interstate route number has to be sent to the Federal Highway Administration within the United States DOT for their review and concurrence. Now you see?
Let's backtrack for a moment on the Sunshine Skyway Bridge and its role as an interstate highway. When the original cantilever spans were built in 1954 and 1971, these spans were not up to interstate standards. When the decision was made to push Interstate 75 southward to Miami the twin cantilever bridges of the Sunshine Skyway were proposed to be brought up to interstate standards. However, the Sunshine Skyway Bridge disaster on 9 May 1980 turned things around a bit: For a while the Sunshine Skyway was being considered as not being part of Interstate 275. In 1981 Interstate 275's future insofar as the Sunshine Skyway was concerned had a bright outlook as a new cable stayed bridge as we know it today would replace the two incompatible cantilever spans.
Hopefully I should set the record straight as to why Interstate 275 was pushed through St. Petersburg and southern Pinellas County and the reasoning behind the two feeder interstates in downtown St. Petersburg, Interstates 375 and 175. As always, I welcome your comments!
Posted by Edward Ringwald at 9:16 PM No comments: